The Gender Migration of Names

Noticing my son's playmates and classmates, the following thought occurs to me: Didn't Sidney used to be a man's name? And August? And Loren?

In other words, Loren/Lauren and Sidney/Sydney went from being modestly popular boys' names to being leading girls' names. But does it ever go the other way around? Do girls' names ever become boys' names? I wouldn't think so: Calling a girl "Joe" (or "Jo") or "Jack" ("Jaq") is cute; calling a boy "Anna" or "Mary" doesn't have quite the same effect. In fact, it might be perceived as something like a lifetime curse.

Male to Female:
(apologies for the small reproduction: click to enlarge) 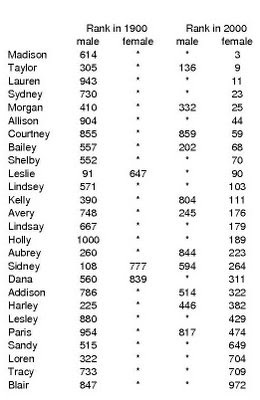 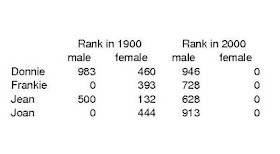 These seem to be aberrations, not a trend. Two appear to be due to an increasing acceptability of "-ie" and not just "-y" as a proper spelling of the long-e suffix for male names. The other two are due to the precipitous decline of "Jean" and "Joan" as girls' names, coupled presumably with the retention of those names as foreign equivalents of the durably and internationally popular boys' name "John". None ranks among the top 500 boys' names.

I can't resist concluding with the thought that if trends continue, someday every Tom, Dick, and Harry will be a girl.
Eric Schwitzgebel at 5:19 PM