Heidegger and Wittgenstein Break Away from the Pack

A philosophical discussion arc (as discussed in Tuesday's post) is the trend, over time, in the use of a term or name as a keyword in philosophy articles and books. As I mentioned Tuesday, discussion of prominent philosophers' work tends to peak around age 55-70. However, not all philosophers show this trend.

I examined the discussion arcs of eight leading philosophers born between 1885 and 1915: Wittgenstein, Heidegger, Carnap, Ryle, Popper, Sartre, Merleau-Ponty, and Quine. On the x-axis is date, in five-year slices. On the y-axis is a ratio: The number of times the philosopher's name appears as a keyword, divided by a broad index of philosophical keywords in the database, times 100. Five of these philosophers show the usual career arc: 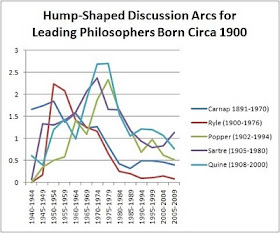 Heidegger and Merleau-Ponty, however, and maybe Wittgenstein, seem to show a different pattern: 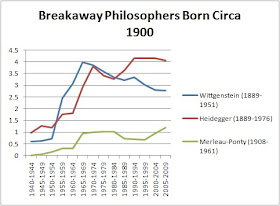 To see more clearly how Heidegger and Wittgenstein broke away from the pack, let's remove the clutter by taking averages: 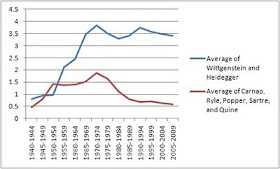 From about 1940-1954, Heidegger, Wittgenstein, Carnap, Ryle, Popper, Sartre, and Quine were all receiving about an equal amount of discussion. But only Heidegger and Wittgenstein increased and sustained that level of discussion in the ensuing decades.

In the previous generation of philosophers, we seem to see the tail end of a similar story, with Frege and Husserl breaking away while Royce, Bergson, Dewey, and Whitehead decline (though declined Dewey is still discussed as much as is broken-away Frege). 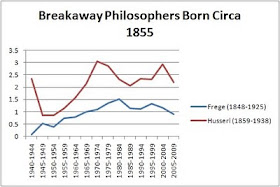 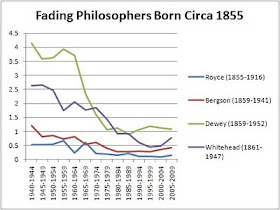