A Story in Which I Acquire Fisheyes, or The Paranoid Jeweler and the Sphere-Eye God

I become paranoid and quit philosophy. But I need to make money somehow, so I become a jeweler. The problem with being a paranoid jeweler is this: Since I am doing close work, I must focus closely through a magnifying lens, which drastically reduces my ability to keep a constant wary eye on my surroundings. Fortunately, being the clever sort, I hit upon a solution: fisheye lenses!

Above each ear, I mount a fisheye lens, each with a 180-degree field of view, together drawing light from the entire 360 degrees of my environment. Mirrors redirect the light to a screen mounted eight inches in front of my eyes, entirely occluding my normal forward view. Reflections from the right-mounted lens fill almost the whole space before my right eye. Reflections from the left-mounted lens fill almost the whole space before my left eye. Thus, binocularly, I simultaneously see my entire 360-degree environment. No one can sneak up on me now! By shifting attention between my right and left eyes and by shifting my gaze direction, I can focus on different objects in my visual field, thus doing my jeweler's tasks. My best view is of objects near my ears, which in fact are magnified relative to what I could see unaided, while objects near midline, directly in front of me, behind me, or above or below me, are radically shrunk and curved. This is no big problem, though, because I can rotate my head to put whatever I want into the privileged field of view. I quickly acquire the habit of walking with my head turned ninety-degrees sideways and with my ear slightly angled toward the ground.

At first, of course, everything looks radically distorted, given what I am used to. Here's how things look on the right side of my visual field when I turn my right ear toward the sky: 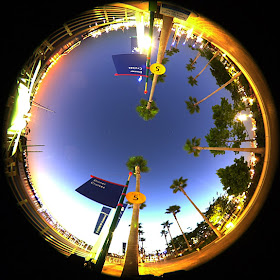 After a while, though, I get used to it -- just like people get used to convex rearview mirrors in cars and just like, given long enough, people adapt to lenses that completely invert the visual field. I come to expect that a gemstone of constant size will look like [this] when held before my forehead and like [that] when held before my ear. I learn to play catch, to ski, to drive a car (no need for rearview mirrors!). After long enough, things look right this way. I would be utterly stymied and physically incompetent without my fisheye lenses.

After long enough, do things go back to looking like they did before I put on the fisheye lenses, the way some people say (but not others!) that after adapting to visual-field inverting lenses things eventually go back to looking the way they did before having donned the lenses? That doesn't seem possible. Unlike in the inverting-lenses case, there doesn't seem to be sufficient symmetry to enable such an adaptation back. I see much better near my ear than in front of my forehead. I see a full 360 degrees. Things might come to look just like I expect, but they can't come look the same as before.

Do things nonetheless look illusory, though now I am used to the illusion? I'm inclined to say no. With full adaptation they will come to seem right, and not illusory -- just as it seems right and not illusory that the angle a person occupies in my visual field grows smaller as he walks away from me, just like it seems right and not illusory that the car behind me appears in my central rear view mirror in my forward gaze as I am driving (and not like a small car somehow elevated in the air in front of me, which I only intellectually know is really behind me). There's nothing intrinsically privileged, I'm inclined to think, about the particular camera obscura optics of the human eye, about our particular form of refraction and focus on an interior retinal hemisphere. Another species might be born with fisheyes, and talk and fight and do physics with us -- do it better than us, and think we are the ones with the weird set-up. A god might have a giant spherical eye gathering light from its interior, in which mortals dwell, with objects occupying more visual angle as they approach the surface of the sphere that bounds its indwellers' world. There is no objectively right visual optics.

From this, I think it might follow that our visual experience of the world as like [this] (and here I inwardly gesture at the way in which my office presents itself to me visually right now, the way my hand before my eyes looks to me right now), is no more the one right veridical visual phenomenology of shape and size and distance than that of my fisheye future self or that of the sphere-eye god.