Here's my definition of a nerd:

A nerd is someone who loves an intellectual topic, for its own sake, to an unreasonable degree.

The nerd might be unreasonably passionate about Leibnizian metaphysics, for example -- she studies Latin, French, and German so she can master the original texts, she stays up late reading neglected passages, argues intensely about obscure details with anyone who has the patience to listen. Or she loves twin primes in that same way, or the details of Napoleonic warfare, or the biology of squids. How could anyone care so much about such things?

It's not that the nerd sees some great practical potential in studying twin primes (though she might half-heartedly try to defend herself in that way), or is responding in the normal way to something that sensible people might study carefully because of its importance (such as a cure for leukemia). Rather the nerd is compelled by an intellectual topic and builds a substantial portion of her life around it, with no justification that would make sense to anyone who is not similarly consumed by that topic. All passions drift free of reasonable justification to some extent, but still there's a difference between moderate passions and passions so extreme and compelling that one is somewhat unbalanced as a result of them. The nerd will sacrifice a lot -- time, money, opportunities -- to learn just a little bit more about her favored topic.

The secondary features of nerdiness are side effects: The nerd might not care about dressing nicely. She's too busy worrying about the Leibniz Nachlass. The nerd might fail at being cool -- she's not invested in developing the social skills that would be required. The nerd might be introverted: Maybe she really was introverted all along and that's part of why she found herself with her nerdy passions; or maybe she's an introvert partly in reaction to other people's failure to care about squid. Oh, but now squid have come up in the conversation? Her knowledge is finally relevant! The nerd becomes now too eager to deploy her vast knowledge. She won't stop talking. She'll correct all your minor errors. She'll nerdsplain tirelessly at you.

The nerd needn't possess any of these secondary features: Caring intensely about the Leibniz Nachlass needn't consume one entirely, and so there can still be room for the nerd to care also, in a normal, non-intellectual way, about ordinary things. But the tendency on average will be for nerdy passion to push away other interests and projects, with the result that uncool, shlumpy introverts will be overrepresented among nerds.

Innate genius might exist. But I don't find the empirical evidence very compelling. What I think passes for innate genius is often just nerdy passion. Meeting the nerd on her own turf, she can appear to be a natural-born genius or talent because she has already thought the topic through so thoroughly that she operates two moves ahead of you and has a chess-master-like recognition of the patterns of intellectual back-and-forth in the area. She has thought repetitively, and from many angles, of the various ways in which pieces of Leibniz might possibly connect, or about the wide range of techniques in prime-number mathematics, or about the four competing theories of squid neural architecture and their relative empirical weaknesses. She dreams them at night. How could you hope to keep up? She will also master related domains so that she exceeds you there, too -- early modern philosophy generally and abstract metaphysics, say, for the Leibniz nerd. Other aspects of her mind might not be so great -- just ask her to fix a faucet or find her way around downtown -- but meet her anywhere near her turf and she'll scorch right past you. If she is good enough also at exuding an aura of intelligence (not all nerds are, but it's a social technique that pairs well with nerdiness), then you might attribute her overperformance on Leibniz to her innate brilliance, her underperformance in plumbing to her not giving a whit.

Movies like Good Will Hunting drive me nuts, because they feed the impression that intellectual accomplishment is the result of an innate gift, rather than the result of nerdy passion. In this way, they are antithetical to the vision of nerdiness that I want to celebrate. A janitor who doesn't care (much?) about math but is innately great at it -- and somehow also knows better than history graduate students what's going on in obscure texts in their field? Such innate-genius movies rely on the fixed mindset that Carol Dweck has criticized. What I think I see in the nerdy eminences I have met is not so much innate genius as years of thought inspired by passion for stuff that no one sensible would care so much about.

Society needs nerds. If we want to know as much as a society ought to know about Leibniz and about squids, we benefit from having people around who are so unreasonably passionate about these things that they will master them to an amazing degree. There's also just something glorious about a world that contains people who care as passionately about obscure intellectual topics as the nerd does. 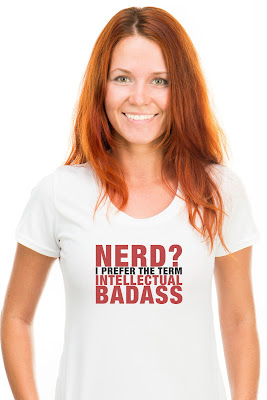