Why Do We Care about Discovering Life, Exactly?

It would be exciting to discover life on another planet -- no doubt about that! But why would it be exciting?

Let's start with a contrast: the possibility of finding intelligence that is not alive -- a robot or a god, without means of reproduction. (Standard textbook definitions, philosophy of biology, and NASA-sponsored discussions all tend to define "life" partly in terms of reproduction.) I'm inclined to think that the search for extra-terrestrial life would have been successful in its aims if we discovered a manufactured robot or a non-reproducing god, even if such beings are not technically alive or are only borderline cases of living things. So maybe what we call the "search for life" is better conceptualized as the search for... well, what exactly?

(Could we discover evidence of a god -- a creator being who exists outside of our space and time? I don't see why not, at least hypothetically. Maybe we find a message in the stars: "Hey, God here! Ask me for a miracle and I will produce one!")

The robot and god cases might suggest that what we really care about is finding intelligence. SETI, for example, takes that as its explicit goal: the Search for Extra-Terrestrial Intelligence. But an emphasis on intelligence appears to underestimate our target. We'd be excited to find microbes on Mars or Europa -- and the search for extra-terrestrial life would rightly be regarded as having met with success (though not the most exciting form of success) -- despite microbes' lack of intelligence.

Or do microbes possess some sort of minimal intelligence? They engage in behaviors that sustain their homeostasis, repelling some substances and consuming others, for example, in a way that preserves their internal order. This type of "intelligence" is also part of standard definitions of life. Maybe, then, order-preserving homeostasis is what excites us? But then, Jupiter's Great Red Spot does something something similar, but we don't seem to think of it as the kind of thing we're looking for in searching for life. 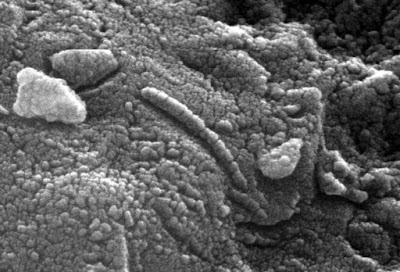 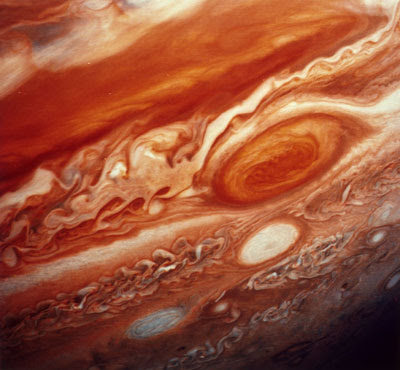 Maybe discovering life would be interesting because it would give us a glimpse of our potential past? Life on Earth evolved up from microbes, but it's still obscure how. Seeing microbial life elsewhere might illuminate our own origins. Maybe, if it's very different from us, it will also illuminate the contingency of our origins.

Maybe discovering life would be interesting because it would complete the Copernican revolution, which knocked human beings out of the center of the cosmos? Earth is still special in being the only planet known to have life, and maybe that sense of specialness is still implicit in our thinking. Finding life elsewhere might knock us more fully from the center of the cosmos.

Maybe discovering life would be interesting because it would be a discovery of something with awesome potential? Reproduction might work its way back into our considerations here. Microbes can reproduce and thus evolve, and maybe their awesomeless lies partly in the possibility that in a billion years they could give rises to multicellular entities very different from us -- capable of very different forms of consciousness, self-awareness, pleasure and pain, creativity, art.

Maybe discovering life would be interesting because terrifying -- either because of the threat alternative life forms might directly pose to life on Earth or, more subtly, because if non-technological life is common enough in the universe for us to discover it, then the Great Filter of Fermi's Paradox is more likely to be before us than behind us. (That is, it might be evidence that biological life is common while technological intelligence is rare, and thus that technological civilizations tend to destroy themselves in short order.)

On the flip side, maybe it would be interesting for its potential use: intelligences with technology to share, non-technological organisms with interesting biologies from which we could learn to construct new medicines or other technologies.

Would it be interesting in the same way to find remnants of life? I'm inclined to think it would have some of the same interest. If so, and if we're inclined to think, for whatever reason, that technological societies tend to be short-lived, then we might dedicate some resources toward detecting possible signs of dead civilizations. Such signs might include solar collectors that interfere with stellar output, or stable compounds in a planet's atmosphere that are unlikely to have arisen except by technological means.

I see no reason we need to insist on a single answer to questions about what ambitions we do or should have in our search for extra-terrestrial company of some sort. But in the context of space policy it seems worth more extended thought. I'd like to see philosophers more involved in this, since the issues go right to the heart of philosophical questions about what we do and should value in general.

Acknowledgement: This is one of two main issues that struck me during my recent trip to an event on the search for extraterrestrial life, funded by NASA and the Library of Congress. Thanks to LOC, NASA, and the other participants. I discuss the other issue, about our duties to extraterrestrial microbes, here.