by Eric Schwitzgebel, Bradford Cokelet, and Peter Singer [poster presentation for the Society for Philosophy and Psychology, 2019 meeting]

All data and analyses are tentative, pending final checks and peer review.

Work by Haidt (2012) and Schwitzgebel & Rust (2016) suggests that philosophical ethical argumentation might have little influence on real-world moral behavior.

However, to our knowledge there are no existing ecologically valid studies of the influence of university-level philosophy classes on non-laboratory, non-self-reported moral behavior.

Half of students were required to read a philosophy article defending vegetarianism (Rachels 2004), followed by a group discussion section and an optional advocacy video.

The other half received similar materials and discussion on charitable giving.

The target question was “Eating the meat of factory farmed animals is unethical” with response options from “strongly agree” (+3) to “strongly disagree” (-3).

We examined campus dining card purchase data for 5,981 campus food purchases from 476 students for whom data were available.

Only purchases of at least $4.99 were included.

Purchases were coded as either vegetarian or non-vegetarian. 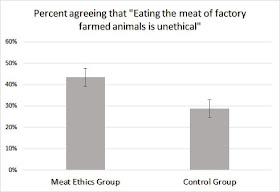 Responses to other ethical questions, including one about charitable giving, did not differ between the groups.

In the control group, 52% of purchases included meat, both before and after the discussion section.

Participant-by-participant among students with purchases both before and after the discussion: 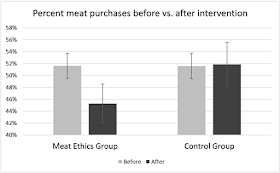 Eric Schwitzgebel at 5:59 AM