How to Count Public Philosophy in Faculty Evaluation Files: A Proposal to U.C. Riverside

The value of public philosophy is increasingly recognized by the profession. However, it's unclear how contributions to public philosophy should be evaluated in tenure, promotion, raises, and retentions. Current standards in most philosophy departments revolve around research, teaching, and service, traditionally construed. How does public philosophy fit in?

In consultation with a few other faculty at U.C. Riverside, I worked up a draft proposal, which I will present to my colleagues at tomorrow's faculty meeting, in hopes that the department will adopt it, perhaps with revisions.

I thought I'd share it here. Suggestions for revision welcome. I have crafted the proposal specifically for the situation at UCR, and I expect not all features of it will translate well to other departments.  However, please feel free to adapt any portion of it you find useful.

Please note: This proposal is not yet adopted and might never be. Myisha Cherry, John Fischer, Kim Frost, and Howard Wettstein also contributed to this document. As such documents ordinarily must, it represents a compromise among competing views. 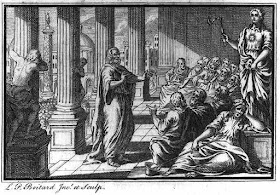 Public philosophy advances the university’s mission and can play an important role in Philosophy Department members’ cases for merit advances and promotions.

Public philosophy can include:

Public philosophy need not be, and typically will not be, published in academic journals.

We note that historically influential philosophers, from Socrates through Dewey, have often directed much of their work toward a broad public.

Public philosophy can count as research or service, or occasionally as teaching.  Ideally, this should be by agreement between the faculty member and the department.

Some work aimed at policy makers or the general public can also constitute a substantial contribution to an academic subfield (for example Carl Cranor’s Legally Poisoned and Kate Manne’s Down Girl).  Such work (including some “trade” books and all “crossover” books) is not subject to the no-more-than-half rule.

If a faculty member’s specialized research for academic audiences already meets research expectations, the addition of a strong profile in public philosophy could potentially justify a claim of exceptional research accomplishment.

Public philosophy contributions can vary enormously in quality, impact, form, substantial content, and time investment, and they are typically not peer reviewed.  Thus, they cannot be counted up in a simple way.  Department members’ contributions to public philosophy should normally be evaluated as an overall package.

For public philosophy counted as service, it is sufficient to establish only that the contribution reflects substantial labor toward valuable service goals, such as communication and outreach.