It's not philosophy or psychology, but I thought I'd post a few reflections on the orphanage (technically, "Social Welfare Institute") from which we just adopted our 14-month-old daughter, Kate -- partly for general interest and partly because accurate information about Chinese orphanages is hard to come by.

Let me start with a few pictures. From the outside: 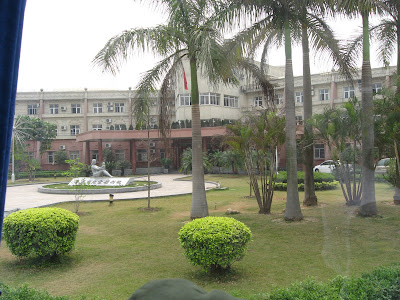 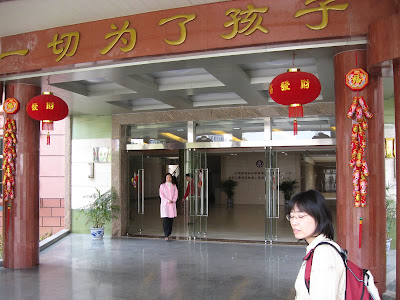 Pretty nice looking -- especially compared to the (by American standards) rundown environment of Dongguan and Guangzhou: Adoptive parents were led to an elegant reception room: 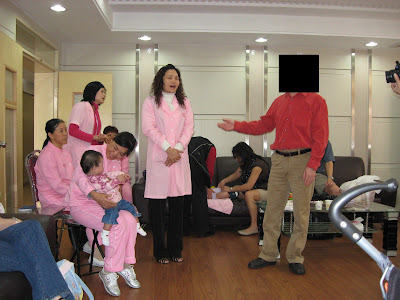 Note the beveled glass tables, elegant walls, leather couches, gleaming hardwood floor. (Those are not things I can afford in my house or office.) I've blocked out the face of our guide for his privacy; the woman standing in the center is the orphanage director.

The orphanage kindly allowed us to see the infants' area, but forbade us to take pictures, so a verbal description will have to do: Two rooms of dingy old rolling steel cribs, each with a baby lying on her back, completely silent. A washroom for dishes, laundry, and babies -- as far as I could tell, all in the same sink. A "playroom" empty but for some blue pads on the floor and single plastic chair.

How eerie it was to step into an utterly silent room containing 25 babies! I can only think that they learned that crying was useless. All the babies were malnourished. Kate is below the 3rd percentile in weight (even on Chinese charts) and head circumference, with calcium deficiency that shows itself (as is evidently typical in Chinese orphans) in splayed ribs at the bottom of the ribcage -- splayed, I'm guessing, because the top part, where the ribs join in the sterum, is stunted and narrow? For malnourished infants, it may be especially adaptive not to waste energy in useless crying.

I kept wondering how much a little more calcium would cost compared to the statue out front (visible in the first picture) and the elegant grounds and couches. Though we liked the nannies who worked there, especially the one who seemed to have had primary responsibility for Kate -- Kate smiled when she saw her -- I couldn't resist the thought that appearance to the outside world was a higher priority to those running the orphanage than the health of the babies. My wife says I'm being uncharitable: Maybe the elegant grounds and waiting rooms are necessary to attract funding from those who can give it. Universities spend big to wine and dine potential donors. Likely, famine relief organizations get more money if they spend some of their proceeds on indulgences for their contributors (not that donors explicitly want that -- presumably if you asked them they'd advocate sending as much as possible directly to the beneficiaries). If so, there's a morally and psychologically interesting paradox of charity.

Well, it seems I can't avoid thinking about philosophy and psychology after all, even when I try!
Eric Schwitzgebel at 10:02 AM