A philosophical discussion arc, as I'll use the term, is a curve displaying how often a topic or author is used as a "keyword" in a philosophical journal article or book abstract (i.e., in the article's or book's title, abstract, or list of key words). By looking at discussion arcs we can see what topics have been hot and what philosophers have been influential.

Let's begin with topical discussion arcs. On the x-axis is publication year, in five-year slices. The y-axis is a ratio: It's the number of articles in the Philosopher's Index containing the keyword, divided by a representative universe of articles, multiplied by 100. The data begin in 1940.

(A ratio is a much more accurate indicator of influence than is raw number, since the number of philosophy articles has increased about twenty-fold since the 1940s. I generated the representative universes, which serve at the denominators, by broad keyword searches, as indicated with each graph.)

Some topics have generated consistent interest over the decades. Dualism is one, as you can see below. The * is a truncation symbol, so this chart tracks any keyword starting with "dualis". 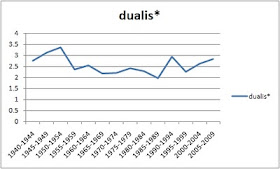 Interest in the leading 17th and 18th century philosophers is also steady across the period (with perhaps Kant gaining discussion and Locke losing discussion): 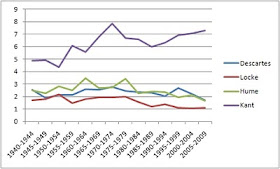 Here, for example, is "twin earth" (a thought experiment about what the word "water" would mean in a world virtually identical to ours but with a different chemical formula for water): 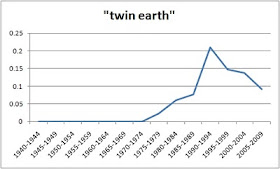 And here is "ordinary language" (a way of thinking about philosophical issues popular in the middle of the twentieth century): 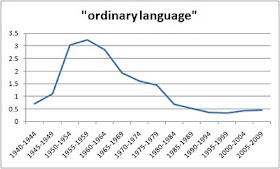 Here's a chart that displays the rise of Nietzsche from the second tier of historical figures into the first tier. (Note Nietzsche's final y-axis numbers are higher than those of Descartes, Locke, or Hume in the chart above.) 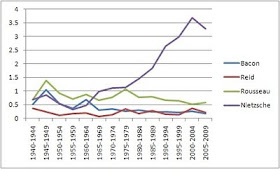 Twentieth century philosophers also have arcs. Here are five influential philosophers born in the 1910s. Note that discussion of their work tended to peak at about age sixty, with the exception of Donald Davidson: 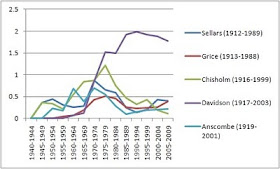 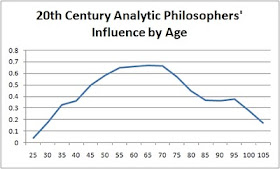 I find it interesting that influence tends to peak at age 55-70, while the age at which philosophers tend to do their most influential work is about 35-40. (Here's a preliminary discussion of that last point; I hope to have fuller data on the matter soon.) I guess it takes time for word to get around!

In this more recent post, I (mostly) retract my claim about the age at which the most influential philosophical work tends to be done. Check out this cool chart!
Eric Schwitzgebel at 4:50 PM