As background for my work on discussion arcs, I've analyzed the distribution of research interests among research-oriented philosophers. Maybe some readers will find the data interesting.

First, I looked at area of specialization, counting only the first listed area: 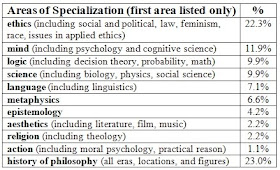 Then I looked at all listed areas of interest: 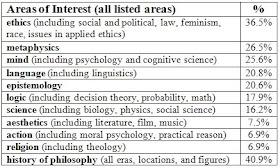 I also broke down historical interest by time period (splitting out Asian as a separate category): 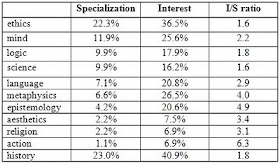 Almost five times as many philosophers list epistemology among their areas of research interest as list it as their first area of specialization. Philosophy of action shows an even higher ratio, though the total numbers are smaller. In contrast, philosophers tend not to express research interest in ethics or philosophy of science unless they list them as their first specialization.