The External World: Further Experimental Evidence of Its Existence

It occurs to me to doubt whether the external world exists -- that is, whether anything exists other than my own stream of conscious experience. Radical solipsism is of course crazy. But can I show it to be wrong? Or is my only recourse simply to assume it's wrong, since any attempt at proof would be circular? Can I break out of the solipsistic circle, using facts about my own stream of experience, knowable from within the solipsistic perspective, to license an inference to the existence of something beyond my stream of experience?

The most famous philosophical attempts to prove the existence of an external world from solipsism-compatible assumptions and methods -- for example, Descartes's and Kant's -- are generally acknowledged by the philosophical community to fail.  I'm inclined to think those attempts fail because they set the bar too high: They aim for certainty through deductive proof.  Better, perhaps, to aim lower -- to use scientific methods and scientific standards, licensing only tentative conclusions as the current best explanation of the available evidence. In another way, too, I aim low: I aim only to refute solipsistic doubts in particular, not other sorts of skeptical doubts such as doubts about memory or reasoning. In fact, I will take the general standards of science for granted, insofar as those general standards are compatible with solipsism. I aim to do solipsistic science.

If solipsism is true, nothing in the universe should exist that is better than I am at chess. Nothing should exist with chess-playing practical capacities that exceed my own. Now I believe that I stink at chess, and my seeming student "Alan" seems to have told me that he is good at chess. If solipsism is true, then he should not be able to beat me at rates higher than statistical chance. I agreed with this seeming-Alan to play twenty games of speed chess, with a limit of about five seconds per move.

Here is what seems to be a picture of our procedure: 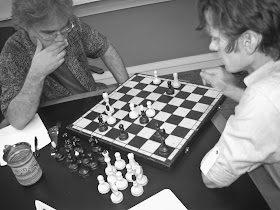 It occurs to me that I might have hoped to lose, so as to generate results confirming my preferred hypothesis that the external world exists. Against this concern, I comfort myself with the following thoughts: If it was an unconscious desire to lose, then that implies that something exists in the universe besides my own stream of conscious experience, namely, an unconscious part of my mind. So radical solipsism is false. If it was, instead, a conscious desire to lose, I should have been able to detect it, barring an unusual degree of introspective skepticism. What I detected was a desire to win as many games as I could, given my background assumption that if Alan actually exists I would be hard pressed to win even one or two games. I found myself repeatedly and forcefully struck by the impression that the universe contained a practical intelligence superior to my own and bent on defeating me -- an impression, of course, confirmed by the results. The most natural scientific explanation of the pattern in my experience is that that impression is correct.

I might easily enough dream of being consistently defeated in chess. But dreams of this sort, as I seem to remember, differ from the present experiment in one crucial way: They are vague on the specific moves or unrealistic about those moves. In the same way, I might dream of having proven Fermat's last theorem. Both types of case involve dream-like gappiness or irrationality or delusive credulity -- the type of gappiness or irrationality or delusive credulity that might make me see nothing remarkable in my daughter's growing wings or in discovering a new whole number between 5 and 6. Genuine dream doubt might involve doubt about my basic rational capacities, but if so such doubts are additional to simply solipsistic doubt. Whether I am dreaming or not, if I consistently experience specific clever and perceptive chess moves that repeatedly exploit flaws in my own conscious strategizing, flaws that I experience as surprising, it seems hard to avoid the conclusion that something exists that surpasses my own conscious intelligence in at least this one area.
Eric Schwitzgebel at 2:52 PM