The Moral World of Dreidel

I used to think dreidel was a poorly designed game of luck. Now I realize that its "bugs" are really features! Dreidel is the moral world in minature. 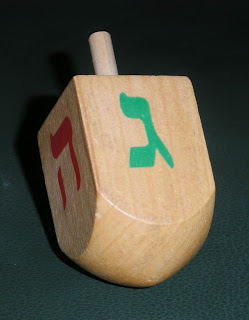 Primer for goys: You sit in a circle with friends or relatives and take turns spinning a wobbly top (the dreidel). In the center of the circle is a pot of several foil-wrapped chocolate coins. If the four-sided top lands on the Hebrew letter gimmel, you take the whole pot and everyone needs to contribute to the pot again. If it lands on hey, you take half the pot. If it lands on nun, nothing happens. If it lands on shin, you put a coin in. Then the next player takes a turn.

It all sounds very straightforward, until you actually start to play the game.

First off: Some coins are big, others little. If the game were fair, all the coins would be the same size, or at least there would be clear rules about tradeoffs or about when you're supposed to contribute your big coins and little coins. Also, there's never just one driedel, and the dreidels all seem to be uneven and biased. (This past Hannukah, my daughter Kate and I spun a sample of dreidels 40 times each. One in particular landed on shin an incredible 27/40 spins. [Yes, p < .001, highly significant, even with a Bonferroni correction.]) No one agrees whether you should round up or round down with hey; no one agrees when the game should end or how low the pot should be before you all have to contribute again. (You could look at various alleged authorities on the internet, but people prefer to argue and employ varying house rules.) No one agrees whether you should let someone borrow coins if they run out, or how many coins to start with. Some people hoard their coins; others slowly unwrap and eat them while playing, then beg and borrow from their wealthy neighbors.

You can, if you want, always push things to your advantage: Always contribute the smallest coins you can, always withdraw the biggest coins you can, insist on using what seems to be the "best" dreidel, always argue for rule-interpretations in your favor, eat your big coins and use that as a further excuse to only contribute little ones, etc. You could do all this without ever once breaking the rules, and you'd probably end up with the most chocolate as a result.

But here's the brilliant part: The chocolate isn't very good. After eating a few coins, the pleasure gained from further coins is pretty minimal. As a result, almost all the children learn that they would rather enjoy being kind and generous than they would enjoy hoarding up more coins. The pleasure of the chocolate doesn't outweigh the yucky feeling of being a stingy, argumentative jerk. After a few turns of maybe pushing only small coins into the pot, you decide you should put a big coin in next time, even though the rules don't demand it -- just to be fair to others, and to be perceived as fair by them.

Of course, it also feels bad always to be the most generous one -- always to put in big, take out small, always to let others win the rules-arguments, etc., to play the sucker or self-sacrificing saint. Dreidel is a practical lesson in discovering the value of fairness both to oneself and others, in a context where proper interpretation of the rules is unclear, and where there are norm violations that aren't rule violations, and where both norms and rules are negotiable, varying from occasion to occasion -- just like life itself, but with only mediocre chocolate at stake.

Eric Schwitzgebel at 9:34 AM