According to a broad class of materialist views, conscious experiences -- such as the experience of pain -- do not supervene on the local physical state of the being who is having those conscious experiences. Rather, they depend in part on the past evolutionary or learning history of the organism (Fred Dretske) or on what is "normal" for members of its group (David Lewis). These dependencies are not just causal but metaphysical: The very same (locally defined) brain state might be experienced as pain by one organism as as non-pain by another organism, in virtue of differences in the organisms' past history or group membership, even if the two organisms are molecule-for-molecule identical at the moment in question.

Donald Davidson's Swampman example is typically used to make this point vivid: You visit a swamp. Lightning strikes, killing you. Simultaneously, through incredibly-low-odds freak quantum chance, a being who is molecule-for-molecule identical to you emerges from the swamp. Does this randomly-congealed Swampman, who lacks any learning history or evolutionary history, experience pain when it stubs its toe? Many people seem to have the hunch or intuition, that yes, it would; but any externalist who thinks that consciousness requires a history will have to say no. Dretske makes clear in his 1995 book that he is quite willing to accept this consequence. Swampman feels no pain.

But Swampman cases are only the start of it! If pain depends, for example, on what is normal for your species, then one ought to be able to relieve a headache by altering your conspecifics -- for example, by killing enough of them to change what is "normal" for your species: anaesthesia by genocide. And in general, any view that denies local supervenience while allowing the presence or absence of pain to depend on other currently ongoing events (rather than only on events in the past) should allow that there will be conditions under which one can end one's own pain by changing other people even without any changes in one's own locally-defined material configuration.

To explore this issue further, I invented a tyrant with the headache, who will do anything to other people to end his headache, without changing any of his own relevant internally-defined brain states. 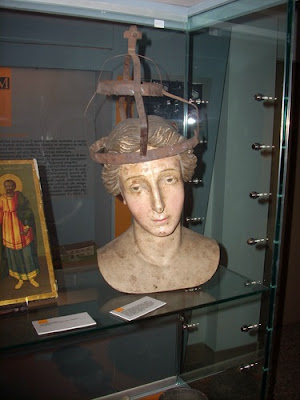