Sharp Declines in Philosophy, History, and Language Majors Since 2010

As I was gathering data for last week's post on the remarkably flat gender ratios in philosophy over time, I was struck by a pattern in the data that I hadn't anticipated: a sharp decline in Philosophy Bachelor's degrees awarded in the U.S. since 2010.

Looking more closely at the year-by-year data, the decline in absolute numbers is entirely in the most recent three years, and quite precipitous:

As a fan of the Philosophy major, I am alarmed!

A broader look at the data is partly reassuring, however: There was a similarly precipitous increase in the numbers and percentages of philosophy majors in the early 2000s, as displayed in the graph below. So maybe we're just seeing the pop of a philosophy bubble? 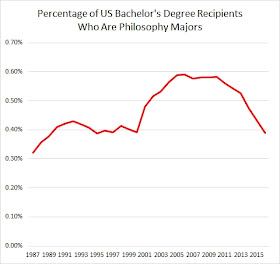 For further context, I examined every other broad category of major with at least 100,000 graduating majors since the 2000-2001 academic year (27 broad majors total). Since 2010, only two other broad majors have declined in absolute number by at least 15%: History and English. Foreign language isn't far behind, with a 13% decline in absolute numbers. So Philosophy's decline seems to be part of a general decline in the main traditional humanities majors. (The three biggest gainers: Computer Science, Health Science, and Natural Resources.)

I've graphed the data below. You'll need to click to expand it to see the whole thing legibly; apologies for my incompetence with the blog graphics. (I've thickened and brightened English, History, and Philosophy. Note also that the English line is mostly obscured by the Philosophy line in recent years.) 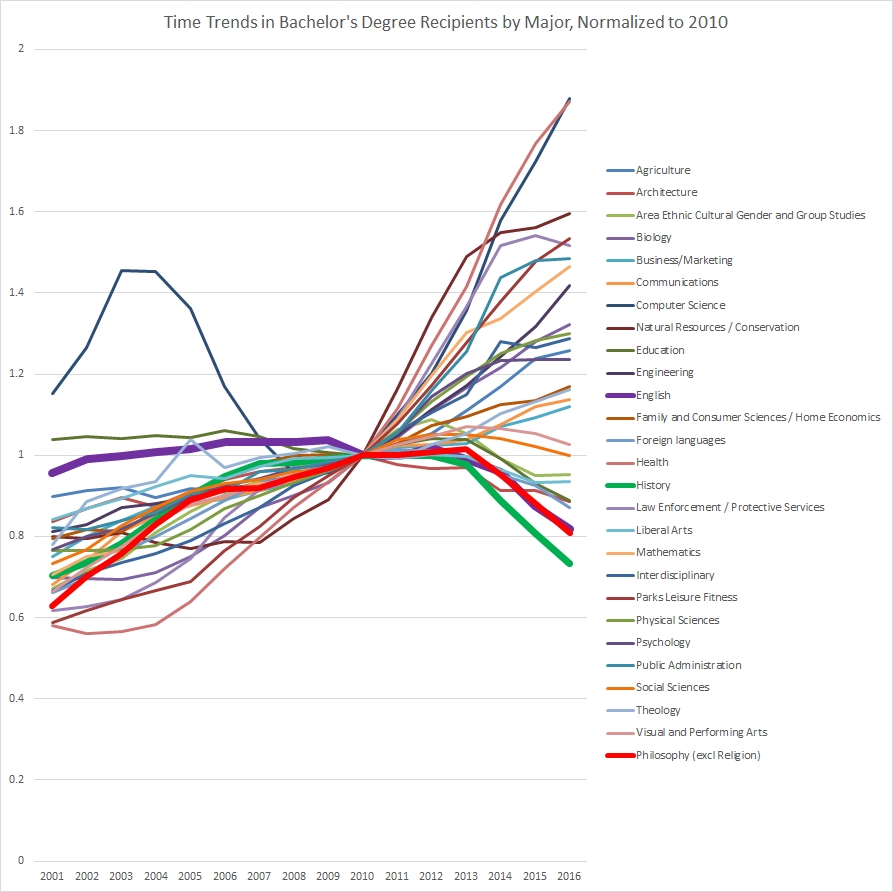 I've put the raw numbers for all major categories in CSV here, if you'd like more detail.

Finally, I looked at recent trends by institution type (Carnegie 2015 basic classification). As you can see from the chart below, the decline appears to occur across most or all institution types. (The top line, for four-year faith-related institutions, is jagged presumably due to noise, given low total numbers.) 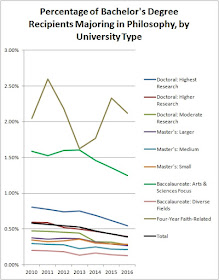 I'm not sure what to make of this. I suppose Wittgenstein, who reportedly advised aspiring students to major in anything but philosophy, would have approved. Thoughts (and corrections) welcome!

ETA (9:55 a.m.): Several people have suggested that it relates to the Great Recession of 2008. I don't think that can be the entire explanation, since the recessions of the early 1990s and early 2000s don't correlate with sharp declines in the major. On Facebook, Todd Yampol offers this interesting analysis:

In many states, business interests have put pressure on the state government to prepare students for the "jobs of the future". They complain that high school & college graduates don't have the specific skills that they're looking for. Also, there has been more and more emphasis on undergrads to finish in 4 years (for a 4-year degree). In California and many other states, there is a state-sponsored "finish in 4" initiative. They provide funding to the state universities for software & other projects that will help students finish in 4 years. They only way to do this, given all the crazy requirements these days, is to determine your major very early & stick with it. This is definitely the case at CSU. Not sure about UC. I believe this initiative started in CA around 2012. I've been working with CSU since 2014. I'm not saying that this is inherently a bad thing. It's just the environment we're living in. I come from a liberal arts background, and I see the value in being a well-rounded person.

I think it comes down to the question "what is the purpose of a state university?" In some states like Wisconsin (where I grew up), there has been a lot of pressure from the (ultra-conservative) state government to dismantle the traditional approach to higher education & research, and turn the emphasis towards job training.

Anyway, the pressure for job skills & to finish in 4 years makes it difficult for young people to explore and find their true interests. How many freshman / sophomores know that they're interested enough in philosophy / linguistics / history / etc to declare it that early? I didn't declare linguistics until my very last semester (long story).

Note 1: Data from the NCES IPEDS database. I looked at all U.S. institutions in the IPEDS database, and I included both first and second majors. Before the 2000-2001 academic year, only first major is recorded. I used the major classification 38.01 specifically for Philosophy, excluding 38.00, 38.02, and 38.99. Only people who completed the degree are included in the data. Some majors have different classification titles and criteria over the period, so I needed to make a few coding/grouping decisions. The most important of these was disaggregating the History subfield from the "Social Sciences and History" category in the 2000-2001 and 2001-2002 data. Although there are some category and coding differences over time in the dataset, the 2011-2012 to 2015-2016 academic years appear to have used exactly the same coding criteria.

Eric Schwitzgebel at 6:56 AM