Believing in Monsters: David Livingstone Smith on the Subhuman

What do people believe, typically, when they speak this way?

The easiest answers are wrong.  Literal interpretation is out: Nazis didn't believe that Jews literally fit biologically into the taxonomy of rodents.  For one thing, they treated rodents better.  For another, even the most racist Nazi taxonomy acknowledged Jews as some sort of lesser near-relative of the privileged race.  But neither is such talk just ordinary metaphor: It typically isn't merely a colorful way of saying Jews are dirty and bad and should be gotten rid of.  Beneath the talk is something more ontological -- a picture of the racialized group as fundamentally lesser.

David Livingstone Smith offers a fascinating account in his recent book On Inhumanity.  I like his account so much that I wish its central idea didn't conflict with pretty much everything that I've written about the nature of belief over the past 25 years. 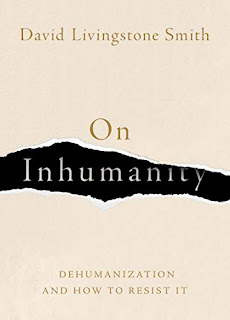 Smith on Conflicting Beliefs and Seeing People as Monsters

What is it to be human?  It is not, Smith argues, just to be a member of a scientifically defined species.  The "human" can be conceptualized more broadly than that (maybe including other members of the genus Homo) or more narrowly.  It is, Smith argues, a folk concept, combining politics with essentialist folk biology.  Other "humans" are those who share the ineradicable, fundamental essence of being "our kind" (p. 113).

To the Nazi, the Jew is literally subhuman in this sense.  The Jew lacks the fundamental essence that Nazi racial theorists believed they shared with others of their kind.  This is a theoretical belief, believed with the same passion and conviction as other politically charged theoretical beliefs.

At the same time, emotionally, perceptually, and pre-theoretically, Smith argues, the Nazi can't help but think of Jews as humans like them.  Moreover, their language shows it: In the next sentence, a Nazi might call Jews terrible people or a lesser type of human and might hold them morally responsible for their actions as though they are ordinary members of the moral community.  On Smith's view, Nazis also believe, in a less theoretical way, that Jews are human.

Suppose you're a Nazi looking at a Jew.  On the outside, the Jew looks human.  But on the inside, according to your theory, the Jew isn't really a human.  Let's assume that you also believe that Jews are malevolent and opposed to you.  Compare our conception of werewolves, vampires, and zombies.  Threateningly close to being human.  Malevolently defying the boundary between "us" and "them".  To the Nazified mind, Smith argues, the Jew is experienced as a monster no less than a werewolf is a monster -- a creature infiltrating our society, tricking the unwary, beneath the surface corrupt, and "metaphysically threatening" because it provokes contradictory beliefs in its humanity and nonhumanity.  Like a werewolf, vampire, or zombie, there might also be superficial differences on the outside that reinforce the creepy almost-humanness of the creature (compare the uncanny valley in robotics).

So far, that's Smith.  I hope I've been fair.  I find it an extremely interesting account.

On My View of Belief, Baldly Contradictory Beliefs Are Impossible

Here's my sticking point: What is it to believe something?  On my view, you don't really believe something unless you "walk the walk".  To believe some proposition P is to be disposed in general to act and react as if P is true.  Having a belief, on my view, is like having a personality trait: It's a pattern in your cognitive life or a matter of typically having a certain sort of posture toward the world.

What is it to believe, for example, that Black people and White people are equally moral and equally intelligent?  It is to generally be disposed to act and react to the world as if that is so.  It is partly to feel sincere when you say it is so.  But it's also not to be biased against Black applicants when hiring for a job that requires intelligence and not to expect the White person in a mixed-race group to be kinder and more trustworthy.  Unless this is your dispositional profile in general, you don't really and fully believe in the intellectual and moral equality of the races -- at best you are in what I call an "in-between" state, neither quite accurately describable as believing, nor quite accurately describable as failing to believe.

The same is true, on my view, with racist and egalitarian beliefs.  You cannot simultaneously have an across-the-board egalitarian posture toward the world and an across-the-board racist posture.  You cannot fully believe both that all the races are equal and that your favorite race is superior.  Furthermore, in the same way that few people are fully 100% extravert or fully 100% introvert, few of us are 100% egalitarian in our posture toward the world or 100% bigoted.  We're all somewhere in the middle.

Smith is keen to convince people to recognize their own potential to fall into dehumanizing patterns of thought.  Me too.  In this matter, I suspect that my demanding view of belief will serve us better.  That would be one pragmatic reason to resolve the dispute about belief, if it's really just a terminological dispute, in my favor.

Smith's sympathetic, anti-racist readers might strain to imagine a future in which they fully believe that some disfavored race is literally subhuman.  That might seem like a truly radical change of view -- something only distantly imaginable after thorough indoctrination.  It is much easier, I suspect, to imagine that our minds could slowly fill with dehumanizing representations of another group, especially if we are repeatedly bombarded with such representations.  And maybe then, too, we can imagine our behavior becoming inconsistent -- sometimes driven by one type of representation, sometimes by another.

Full belief, I want to suggest, needn't be at the core of dehumanization, and an account of dehumanization needn't commit on how demanding "belief" is or whether baldly contradictory belief is possible.  Instead, all that's necessary might be confusion and conflict among one's representations or thoughts about a group, regardless of whether those representations rise to full belief.

Suppose then that you world fills you, over and over, with conflicting representations of another group, some humane and egalitarian, others monstrous and terrible.  Once the dehumanizing ones are in, they start to color your thoughts automatically, even without your explicit endorsement.  As they gain a foothold, you begin to wonder if there is some truth in them.  You become confused, wary, uncertain what to believe or how to act.  Your group enters in conflict with the group.  You feel endangered -- maybe by famine or war.  Resisting evil is difficult when you're confused: Passive obedience is the more common reaction to doubt and conflicting thoughts.

Beneath your confusion, doubt, and fear lie two conflicting potentials.  If the situation turns one way -- a neighbor who did you some kindness knocks on your door asking for a night of shelter -- maybe you start down the path toward great humanity and courage.  If the situation turns another way, you might find yourself passive in the face of great evil, unsure what to make of it.  Maybe even, if the threat seems terrible enough and the situation pulls you along, drawing the worst from you, you might find yourself a perpetrator.  Acting on a dehumanizing ideology does not require fully believing that ideology.

On September 29, I'll be chatting (remotely) with David Livingstone Smith at Warwick's bookstore in San Diego.  I think the public is welcome.  I'll share a link when one is available.

Eric Schwitzgebel at 9:40 AM