by Eric Schwitzgebel, Morgan Thompson, and Eric Winsberg Earlier this year, with the help of a grant from the APA, we obtained data from the Higher Education Research Institute (HERI) on intention to major in philosophy among first-year students in the U.S. In earlier posts, we analyzed these data by gender and sexual orientation. See those earlier posts for more details about the dataset and some methodological concerns.

The data on race are more complicated, partly because race categories change over time and partly because of sampling bias and non-response bias. However, after exploring the data from several different angles, we believe the data support the conclusion that since the year 2000, Black students have become increasingly interested in majoring in philosophy.

Across the U.S., Black people constitute about 13% of the general population. Black people are, however, underrepresented among students completing Bachelor's degrees (9% in the 2018-2019 academic year). In a previous analysis of completion rates using data from the National Center for Education Statistics (NCES), Eric S. found that from 1995-2016, the percentage of Philosophy Bachelor's degree recipients who are Black was about half of the percentage of Bachelor degree recipients overall who are Black: In 1994-1995, 3% of Philosophy BA recipients were black, compared to 7% of Bachelor's recipients overall; by 2015-2016, the percentages had risen to 5% in Philosophy and 10% overall.

The HERI database allows us to compare these graduation data with first-year intention to major. Also, since the HERI data run through Fall 2016 (average expected completion 2022), we can look at a slightly younger cohort. Furthermore, since NCES has recently released data for the 2018-2019 academic year, we can also update those data.

From Fall 2000 through Fall 2016, HERI collected first-year intention to major from 4.9 million students. Race/ethnicity questions varied somewhat over time, but students were always able to respond with more than one race. HERI currently aggregates all past and present race/ethnicity questions into seven categories: American Indian, Asian, Black, Hispanic, White, Other, and Two or More Races/Ethnicities.

As usual, American Indian respondents were a tiny percentage of first-year students: 0.2-0.3% overall, and 0.0-0.4% of those intending to major in Philosophy.

The following charts show the percentage of students in the Asian, Black, Hispanic, and Two or More categories by year, both in Philosophy and overall. (Click the images to enlarge and clarify.) 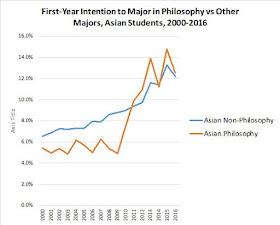 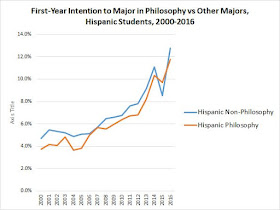 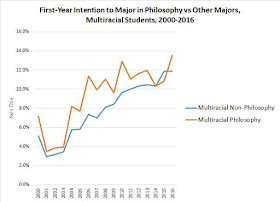 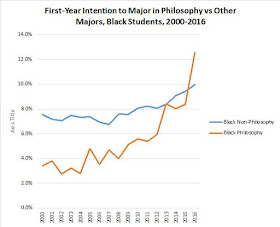 As you can see from the images, the percentage of students entering college intending to major in Philosophy who identify as Asian, Hispanic, or multiracial approximately matches the overall racial percentages across all majors. Until recently, it looks like Asians were a little underrepresented and multiracial students overrepresented in Philosophy, but both groups are now near proportionality.

The numbers aren't large, but they are large enough to rule out random variation as the primary explanation. The most recent four years of data, for example, contain data from 201 Black students intending to major in Philosophy among 2176 Philosophy majors overall, and the early years have even larger overall sample sizes.

Unfortunately, there are reasons to be concerned about the representativeness of these data. Let's not too quickly uncork the champagne.

Although the HERI surveys drew huge numbers of respondents in the early 2000s (376,777 in the year 2000 alone), by 2016, the number of respondents had declined by more than half, to 121,297. Furthermore, as HERI clarifies in its methods sections, school participation rates vary substantially by school type. For example, high-status private undergraduate universities are more likely to participate in the HERI data collection than are lower-status state universities. The possible unrepresentativeness of institutions included in the HERI dataset is a serious potential issue.

We have two approaches to address this methodological concern.

First, in recognition of these sampling issues, HERI supplies researchers with a variable called "student weight" which functions to overweight students from groups they anticipate to be undersampled and to underweight students from oversampled groups. Although we are somewhat hesitant about the use and interpretability of this variable, it represents HERI's best attempt to compensate for sampling and nonresponse issues, so we reanalyzed the data using the student weight correction. The results were not materially different. For example, over the past four years (2013-2016), with the weighting correction, Black students were 10% of first-year students intending to to major in Philosophy as well as 10% of first-year students overall, compared to 5% Philosophy and 11% overall in the first four years of the dataset (2000-2003). The correction thus supports the general finding that over the period Black students went from being seriously underrepresented among first-year students intending to major in philosophy to being about proportionately represented.

Second, we compared with NCES data on Bachelor degree completions. The NCES IPEDS dataset is reported by administrators at accredited schools, constituting an approximately complete record of Bachelor's degree recipients in the U.S., largely avoiding systematic sampling and nonresponse distortions.

As has been generally observed, and in keeping with the HERI data, the percentage of graduates identifying as White fell considerably over the period: from 70% to 59% in Philosophy and from 65% to 57% overall. White students are still slightly overrepresented in Philosophy (59% vs. 57% overall, two-proportion z = 3.0, p = .003).

As with the HERI data, we start with graphs for Asian, Hispanic, and Multiracial: 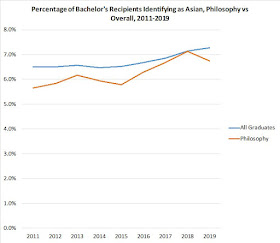 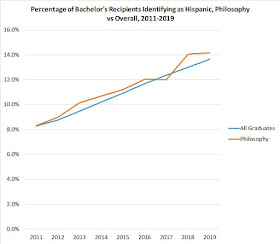 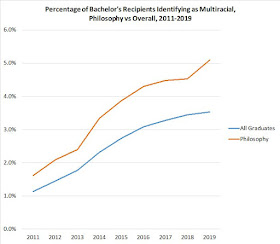 These trends fit fairly well with the HERI data: Hispanic students are proportionately represented among Philosophy majors throughout the period. Asian students are perhaps a bit underrepresented. Multiracial students are somewhat overrepresented, as indeed they are in years 2005-2013 in HERI data (bearing in mind the six-year offset).

What about Black students? 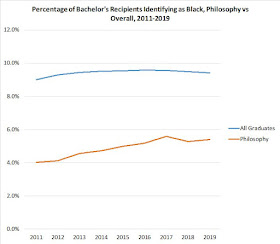 Nevertheless it's worth noting and perhaps celebrating one point of consensus between the NCES and HERI data: Over the past several years, Black students have become increasingly interested in Philosophy, both upon entering their first year of undergraduate study and upon completing the major. This conclusion is supported by both the HERI and NCES data. It might not look like much in the NCES graph, but the increase from 4.0% to 5.4% over nine years is arguably a meaningful move in the direction of proportionality (and yes, statistically significant at p < .001).

It remains to be seen if the very recent spike in first-year Black student's intention to major in Philosophy, which seems so encouraging in HERI, shows itself in a continued rise in completions of the degree in the 2020s. If not, at least two possible explanations suggest themselves: (1.) Some undetected sampling bias is messing up the HERI data, or more worryingly (2.) Black students are disproportionately more likely to leave or less likely to enter the Philosophy major in the period between first-year intention to major and actual completion of the degree.