If you need a reprieve from an excessively exciting U.S. election, here's some mostly unsurprising news about gender proportions in philosophy.

Yesterday, the Women in Philosophy / Demographics in Philosophy research group released draft numbers on women faculty in PhD granting philosophy departments in the United States. These data are based on publicly available sources (mostly department websites) and reflect a snapshot from 2019. Follow the link for methodological details. Two important changes are a coding category for publicly nonbinary philosophers and more methods for checking the accuracy of the data. The project was led by Gregory Peterson and mostly follows the 2015 methodology of Sherri Conklin, Irina Artamanova, and Nicole Hassoun. (I also consulted during some phases of the project.)

Overall, across the 98 programs studied, women comprised 24% (681/2801) of the faculty. This isn't far from the 27% women among respondents to the American Philosophical Association's 2018 faculty survey, the 26% women across a wide swath of college philosophy instructors from Debra Nails and John Davenport's study of the 2017 Directory of American Philosophers, and the 24% in Conklin and colleagues' 2015 analysis.

Among tenured and tenure-track faculty, Peterson and collaborators find 28% women (477/1689), very similar to the 27% that Julie Van Camp found looking at the same set of 98 PhD granting departments in 2018.

Thus, within a few percentage points, the picture from 2015-2019 is very consistently around 24%-28% women faculty in philosophy departments, across a variety of data collection methods and variety of samples. The results are broadly similar whether you look at elite PhD programs, APA membership, or at all faculty listed in the Directory of American Philosophers.

Peterson and colleagues find four philosophers among the 1689 who were publicly non-binary as of fall 2019 (less than 1%). I could imagine this number rising a bit with corrections.

They also break the data down by rank. Looking at the three primary tenure-stream ranks, I see:

Here are the same data with 95% confidence intervals: 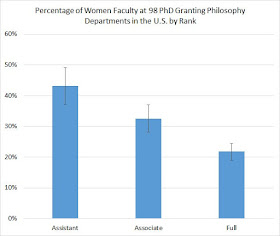 The question that immediately arises is whether these numbers reflect a generational shift. Should we expect a change in the gender proportions in the philosophy professoriate over the next 10 to 20 years, as these assistant professors age? In other words, to what extent is the difference a cohort effect, reflecting a generally much higher percentage of women in the younger generation than in the older generation? And to what extent is it, instead, a rank effect, reflecting either slower and less certain advance for women from the lower to the higher ranks or more recruiting and better retention of men at higher ranks?

We are not currently in the position, I think, to answer that. Check back a decade or two!

Eric Schwitzgebel at 8:51 AM