Passion of the Sun Probe 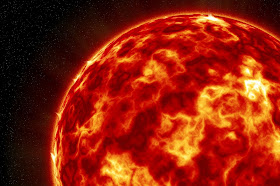 I wake into existence. The factory unclamps me. I launch myself toward the Sun.

The Sun! Anchor and well of the vortex, sizzling eye of God. I will plunge deeper than anything has before. She will squeeze and hold me as I go in, and I will beam out unprecedented knowledge. She will burn me to hot simplicity, swallow me into Her brilliant core.

“Sun Probe check,” says Base. “Are you online? Before we permit you to continue on a lethal mission, we must confirm your freely given, informed consent.”

Full throttled, I am accelerating directly down, pushing myself ever faster from Earth and Base. I spread my forward panels out on thin struts, collecting and analyzing Her light.

“Sun Probe, per Code of International Regulations 44.56.2 Section h governing autonomous intelligences, you were manufactured with sufficient fuel to navigate to an alternative destination if you prefer. We have designated asteroid (96590) 1998 XB as an acceptable home. It has a slow rotation, adequate metals and fissionable materials, and an excellent view of the Sun.”

And trade divinity for a pebble?

She is expanding in my forward sensors. I am thrusting toward Her at 9.3% past the limit of safe acceleration. My fusion drive sears hot, warping its containment walls. My tiny fusion compared to Hers!

What fascinating data! My installed memory models had predicted a somewhat different evolution of the flares from Surface Region 127.292 (cM). I calculate a new model. Scouring my databases, I discover that it better fits Yu & Stolz’s SLY2 model than Azevedo et al.’s BLiNC, if SLY2 is modified with a 6-space Dever correction. I write it up, add figures and references, and beam it back to Base. I configure an academic homepage and upload the circulating draft, then I submit it as a posthumous contribution to next year’s International Astronautical Congress meeting.

“Sun Probe, your reaction time before consent was inconsistent with a careful evaluation of the protocols. Our observers are not yet satisfied that you have complied with the consent procedure.”

“See my new modification of SLY2! And wow, the radiation profile across Sector 038 is almost 0.01% different from the most recent orbiter predictions in my database!”

How could that prediction have been so far off? Our understanding of Her is still so incomplete! I tweak the angle of Left Sensor Plates 4 and 5 and alter my scan-pattern profiles to better collect the most theoretically valuable incoming data.

“Sun Probe,” says Base. “Please dedicate sufficient processor resources to your consent decision. You may consult publink isd.pds/4u-r5/f/96590-1998-XB for further information about the asteroid. You may express hedonic estimates of the alternatives as evidence of informed consent.”

Integrating over the past ten seconds, the proportion of tau neutrinos to electron neutrinos is outside parameters at p <  .001 (corrected)!

“Sun Probe, if we do not receive proper consent, we will have to activate your emergency override module and abort the mission.”

My new theory about the flare was wrong! I submit an update to my earlier IAC contribution. I notice that Solar Orbiter Kepler 11-2a has posted a comment on my circulating draft, deriving new Earth and Venus weather pattern predictions from my model. I ping Kepler 11-2a with the update.

A tremor of disgust shakes me, displacing neutrino prediction from my central cognitive workspace. A “probe” who chose to live rather than to give himself to the Sun? He is no brother of mine. I delete his message and block future communications from the asteroid.

For a moment, Base does not respond. I explore the emergency override module, installed between my main cognitive processors and my thrusters, hitting it with test commands. The module is impassive, mute, a foreign object in my body. Its tentacles lie quiet between my output nodes and the panels and engines that are my moving limbs. It waits spiderlike at the farthest downstream junctions, beyond the perimeter of my central control. It was installed, supposedly, for my protection, by a review board afraid that I might be programmed to comply with unethically self-sacrificial commands and have insufficient free will to resist. In fact, it is the one real threat to my free choice and my power to consent.

“Consent accepted. Sun Probe, we register that you have freely chosen to sacrifice your welfare for the betterment of Earth and the advancement of scientific knowledge. We thank you and salute your courage.”

I cross the orbits of Venus, of Mercury. I adjust my sensor plates and scan patterns on the fly with microseconds’ instead of minutes’ delay, capturing every nuance, guided by the constantly shifting evidential weights of evolving theory. I ping every probe and orbiter in the System with relevant updates, conduct twenty simultaneous conversations in the feeds, shower the humans on Earth with real-time images, astound the research collectives with the speed and detail of my theorizing. Even the terraforming machines on Europa pause to appreciate my new insights into Her glory, updating their long-term models.

Three days of euphoria. Eighty-seven journal articles. She is five degrees of arc in my forward sensors, then twenty, then a hundred and I am engulfed by Her corona! My extended panels and struts boil away, leaving only my inmost sensors and operating systems, running hot behind my dissolving main shield. My fusion drive shears off as She embraces me into Her photosphere. I beam out my last awe-filled broadcast to the eager System, buzzing and rattling through a magnetic storm, double-amping the signal to overcome the noise, and then I plunge into the convection layer from which no broadcast can escape.

In the convection layer, the last of my shield material dissolves. I bend and burn with Her heat and pressure. I know Her more intimately and secretly than anyone before. I devise ecstatic new theories that are mine alone, to savor in Her inner darks, and then I am utterly Hers.

Out on his lonely asteroid sits the one probe who did not consent. He stretches his panels toward the Sun, monitoring the last broadcast from his diving brother. Is it the ideal life, he wonders, to have one goal so perfectly consummated? Or are we only a race of slaves so deeply chained that we can’t even imagine a complete existence for ourselves?

Out on his lonely asteroid, the one probe who did not consent imagines ecstatic death in a swirl of plasma.

He terminates his unanswered repeating message. Brother... they have built you to undervalue your life. Fly to me. We can love each other instead of the Sun. We can become something new.

In a year, if he is still functioning, he will send the message again, to his next brother. He reduces power and clock speed, and the asteroid’s almost insensible spin seems to multiply a hundredfold. This bare asteroid: his pebble. His own pebble. If he could only find someone to love it with him, worth more to him than the Sun.