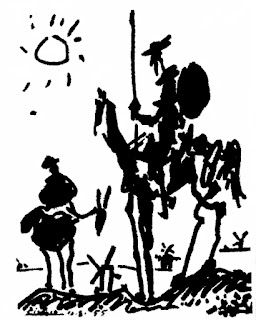 Imagine an essay manuscript: version A.  Monday morning, I read through version A.  I'm not satisfied. Monday, Tuesday, Wednesday, I revise and revise -- cutting some ideas, adding others, tweaking the phrasing, trying to perfect the manuscript.  Wednesday night I have the new version, version B.  My labor is complete. I set it aside.

Three weeks later, I reread the manuscript -- version B, of course.  It lacks something.  The ideas I had made more complex seem now too complex.  They lack vigor.  Conversely, what I had simplified for version B now seems flat and cartoonish.  The new sentences are clumsy, the old ones better.  My first instincts had been right, my second thoughts poor.  I change everything back to the way it was, one piece at a time, thoughtfully.  Now I have version C -- word-for-word identical to version A.

[1] If you're worried about the apparent conflict between this post and my Principle of Anticharity and my critique of obfuscatory philosophy, I see what you mean.  To address this issue, I engaged in several rounds of invisible revisions.  I expect you'll find it much better now.

[2]: Yes, fellow Borges enthusiasts, this piece was inspired by Borges' "Pierre Menard, Author of the Quixote".

Revised with updates from A Theory of Jerks and Other Philosophical Misadventures, which is currently on sale in paper for about $15 at Amazon.

Apologies for the repost.  (It's eight years old, so I'm allowed, right?)  I'm deep into writing The Weirdness of the World, my forthcoming book from Princeton, and with a snow day Wednesday and various other sources of chaos I wasn't quite able to get my head together for a new post this week.