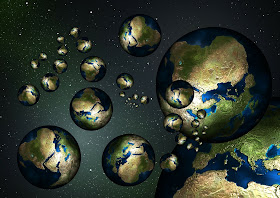 Now try solipsism. According to solipsism, "there's nothing but my own mind!" But this could mean any of a few different things. Presumably it's not restricted just to my house, since then solipsism (well, a cousin of it) would be true whenever I'm home alone. But it could be restricted just to my universe. According to solipsism, in this sense, my mind is the only thing that exists in the universe. But this leaves open the possibility that, if there are other universes, they might be full of things other than me. Call this universal solipsism. A stronger, bolder, more radical solipsism might commit to the view that no matter how many universes there are, not one of them contains anything apart from my own mind. We could call this still-lonelier view cosmic solipsism.

Metaphysical idealism, denial of the existence of ghosts or gods, denial of emergent properties, supervenience views, reductionist views (i.e., X is "nothing but" Y), etc., all admit the same ambiguity. The general structure can be expressed as "It is not the case that there exists an X such that X is F and (implicitly) X is G, where G specifies some grand scope like "in this universe" or "anywhere in the entire cosmos".

There are lots of potential scope specifications grand enough to fit the grand ambitions of negative metaphysical and cosmological claims, such as "in any metaphysically possible world" or "in any region of the cosmos in which the same laws of nature obtain" or "in any region spatiotemporally continuous with ours" or "in any bubble universe arising from the same inflationary foam"....

However, there are four scope specifications that I'm finding useful in my own thinking, which I will semi-stipulatively call, in increasing scope, realities, universes, worlds, and the cosmos.

Let's start with universes. As far as I'm aware, there isn't one orthodox usage of "universe" across philosophy and physics -- a variety of precisifications of this idea will be useful for different purposes. One aspect of usage that I'd like to respect is that multiverse theories postulate the existence of multiple universes, entirely or almost entirely spatiotemporally or causally disconnected from each other and possibly instantiating different laws of nature or having different physical constants. So far, I haven't found a definition that makes this precise without running into troubles. I'm going to embrace one definition, note three concerns, then put a big asterisk on those concerns.

Concern 1: What about universes that aren't spatiotemporal? I don't want to rule those out by definition. Maybe space and time are features of some universes but not others.

Concern 2: What about partial connection? Maybe one universe nucleates from another, out the backside of a black hole for example, with just the tiniest bit of spatiotemporal connectivity -- two giant lobes, perhaps, which share a tiny part in their past but otherwise remain unconnnected. Another tricky case might be a version of the "many worlds" view of quantum mechanics in which "worlds" (universes?) share a spatiotemporal past but become (mostly?) disconnected going forward after a splitting event.

Concern 3: If spatiality or spatiotemporality is a derivative or functional concept, this definition might wreak havoc with the distinction between universes and realities I will describe below.

I henceforth disregard all three concerns, hoping that the promissory "or similar" can address #1, that issue #2 can be left as a terminological decision with an admittedly vague boundary, and that the clarification of "realities" below can partly address #3.

Next: the cosmos. I reserve this term for the largest category of what exists. By definition, there cannot be more than one cosmos. It is everything in the strictest sense of everything.

Next: worlds. This word has highly variable usage. I've already mentioned the "many worlds" interpretation of quantum mechanics. In another sense, a planet can be a "world", or even just a society ("the world of ancient China"). In another sense, a "world" can be larger than a universe. That is my intended sense. Modal realism is the view that "possible worlds" really exist. A modal realist could, I think (contra David Lewis), hold that the actual world contains multiple spatiotemporally unconnected universes and that other possible worlds have either one or many spatiotemporally unconnected universes. Maybe, for example, in our world, muliple universes arise from inflationary foam, but also another world exists without the kind of laws or initial conditions that give rise to inflation. Maybe not, of course! But so as not to rule out the possibility by definition, it's useful to have a (possibly redundant) category between universes and the cosmos: There might be more than one world, and it might be the case that at least one of those worlds might contain more than one universe. Thus universes ≤ worlds ≤ cosmos.

Finally, realities. The intuitive notion here is that of a "virtual reality" or (not the same, but sharing some features) a simulation in Nick Bostrom's and David Chalmers's sense. Imagine someone living in The Matrix. Their biological body is stored motionless in a warehouse somewhere, but they experience a wide reality in which they do all sorts of things, coordinated with other people who experience the same reality -- like you're all in a big shared VR game. Underneath, the whole thing is managed by megacomputers. People in such a reality would be in the same physical universe as the computers who manage the reality. But their experiential reality would be quite different. The universe might contain many virtual realities, populated with entities who experience space and time very differently from how it runs outside of their realities. And some of these realities might be such that no matter how far you travel within them, or what you do, you can make no further independent contact with the universe beyond. The inhabitants are, so to speak, entirely enclosed within.

Thus, a universe could contain many virtual realities, or other enclosed pockets in which the experienced spatiotemporal manifold of the entities within it doesn't map well onto the spatiotemporal structure of the larger universe that contains them. (Depending on your metaphysics of space and time, this could raise concern #3 about the definition of "universe" above.)

Okay, so here is the most boring possible view: reality = universe = world = cosmos. There are no virtual realities or other pocket realities of the sort just described. There is only one universe. And that universe is the whole of the cosmos. This might be true. (Yawn.)

Here is the wildest possible view: reality < universe < world < cosmos. There are multiple realities in our universe (perhaps we ourselves are inside a simulation, instead of being at the "ground level" of our universe), multiple universes in our world, and muliple worlds in the cosmos.

Back to materialism, disambiguated with all the inequalities in place:

We might live in a reality that is wholly material (in the somewhat attenuated sense that what is empirically available to us is experienced as matter occurring in space and time and nothing more), while our universe is not material. (If this seems incoherent or inconceivable, check out my essay Kant Meets Cyberpunk.) Our universe might be wholly material, while our world contains other universes that are not. Our world might contain only material universes, but other worlds might contain universes that aren't wholly material. Or everything that exists in the every world in the cosmos might be wholly material. These are at least four different strengths of the materialist thesis. In fact, there are more strengths, given that is this only a rough pass at scope specification.

The reality-universe distinction will be tricky for solipsism, but apart from that it will look like the materialism case, if we're okay with the "or similar" clause on the definition of universes.

Now do it for ghosts and gods if you like. See? Kind of interesting, I hope -- at least if you're the kind of philosophy/cosmology nerd who would read to the end of a post like this!

Skepticism, Godzilla, and the Artificial Computerized Many-Branching You (Nov 15, 2013)

Eric Schwitzgebel at 8:48 AM