I have finally received the final published PDF of my article "The Pragmatic Metaphysics of Belief". What a pleasure and relief. I poured so much time into that paper! I started presenting versions of it to academic audiences in 2015, including at two APAs and in colloquium talks or mini-conferences at nine different academic departments on three continents. It has been rewritten top to bottom several times and tweaked between, through probably about 100 different versions over six years.

Now there it is, the last chapter in The Fragmented Mind from Oxford University Press. How many people, I wonder, will read it? 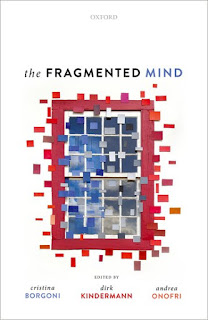 I suspect that people outside of academia rarely understand how much work goes into research articles that relatively few people will read. In a way, it's a beautiful thing. There is so much energy, thought, and care in academic research! Every article, even the ones you might be inclined to dismiss as wrong-headed and foolish, is the long labor of someone who has excelled over many years of specialized education, usually through the PhD and beyond, dedicating their enormous talents to the issues discussed. Every article is a master's careful craftwork, an intricate machine into which a skilled specialist has poured their academic passion, usually for years. (Well, maybe not every article.)

This is why I loathe the casual dismissal of others' work, as well as the false and cynical view that far too much "junk" is published in academic journals these days.

Every year I publish a few articles, so in a sense this is just one more in a series. Maybe I'm inspired to these thoughts because this one has gone through more versions than average and taken longer than average.

This newest article is about what it is to believe. I set up a debate between "intellectualist" and "pragmatic" approaches to belief, and I argue in favor of the latter.

According to intellectualist approaches to belief, sincere endorsement of a statement is approximately sufficient for believing that statement. If you feel sincere when you say, "Women and men are intellectually equal" or "My children's happiness is far more important than their grades at school", then you believe those things, regardless of how you generally live your life.

According to pragmatic approaches to belief, what you believe isn't about what you are sincerely disposed to say. It's about how you live your life. If you say "women and men are intellectually equal" but you don't act and react accordingly -- if you tend implicitly to treat women as less intelligent, if you're readier to ascribe academic brilliance to a man, etc. -- then you don't really or fully have the belief you might think you have. If you say "my children's happiness is more important than their grades" but your day-to-day interactions with them display much more concern about their academic success than their mental health, then you don't really or fully have that belief.

Now that I've set things up this way, I hope you can already start to see why why a pragmatic approach is preferable, even if we often implicitly take the intellectualist approach for granted. But if you need some additional arguments, here are three:

(3.) The pragmatic approach discourages noxiously comfortable self-assessments by forcing us, when we think about what our beliefs are, to examine our behavior and implicit assumptions. We don't get to casually and comfortably say "oh, yes, of course I believe women and men are intellectually equal and that my children's happiness is more important than their grades", patting ourselves on the back for these admirable attitudes. Instead, if we really want to honestly say we genuinely believe these things, we will need to take a look at our general comportment toward the world, which might not be as handsome and consistent as we hope.

If you're curious to read more, the final manuscript version is here, or you can email me for the final PDF version, or you can buy the whole anthology when it finally appears in print in a week or two (or six?).

Eric Schwitzgebel at 8:43 AM