The Philosophy Major Is Back, Now with More Women

The National Center for Education Statistics has released its 2020 data on Bachelor's degree recipients in the U.S. The news is fairly good for the philosophy major.

The Philosophy Major Is Back

Since then, the major has stabilized in percentage terms and increased in absolute numbers:

It's possible that the anemic academic job market in philosophy since the 2008-2009 recession has partly been due to declining demand for the major. Now that demand is back on the rise, perhaps hiring will recover somewhat.

The other big humanities majors, unfortunately, are still in deep trouble. History has stabilized in absolute numbers while continuing to decline as a percentage of graduates overall. English and foreign languages and literatures continue to decline in both absolute and relative terms. English is down 27% since 2010 in absolute numbers and foreign languages and literatures down 20%, while the total number of Bachelor's recipients across all majors has risen 30%. 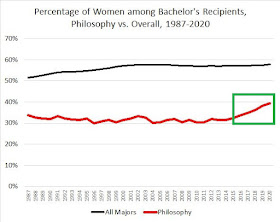 As you can see from the chart, women were very steadily 30-34% of Bachelor's recipients in philosophy from 1987 to 2016. In 2017, they reached 35% for the first time. In 2018, 36%. In 2019, 38%. In 2020, 39%. Although this might seem like a small increase, given the numbers involved and the general slowness of cultural change, this constitutes a substantial and significant movement toward parity. This increase appears to be specific to philosophy. For example, it is not correlated with the percentage of women graduates overall which rose from 51% in 1987 to 57% in 1999 and has remained steady at 57-58% ever since.

I'll be interested to see if this increase shows up among PhD recipients in several years, where the percentage of women remains stuck in the high 20%s to low 30%s.

As I have also noted before, philosophy relies heavily on double majors. This is especially true for women. Aggregating over the past four years of data (2017-2020), 42% of graduates with a second major in philosophy were women, compared to 36% of graduates whose only or primary major was philosophy. Again, this trend is specific to philosophy. Overall, among graduates of all majors, women are neither more nor less likely than men to declare a second major.