Most of the philosophical literature on immortality and death -- at least that I've read -- doesn't very thoroughly explore the consequences of temporal infinitude. Bernard Williams, for example, suggests that 342 years might be a tediously long life. Well, of course 342 years is peanuts compared to infinitude!

Call this choice The Immortal's Dilemma.

Given infinite time, a closed system will eventually cycle back through its states, within any finite error tolerance. (One way of thinking about this is the Poincare recurrence theorem.) There are only so many relevantly distinguishable states a closed system can occupy. Once it has occupied them, it has to start repeating at least some of them. Assuming that memory belongs to the system's structure of states, then memory too is among those things that must start afresh and repeat. But it seems legitimate to wonder whether the forgetful repetition of the same experiences, infinitely again and again, is something worth aspiring toward -- whether it's what we can or should want, or what we thought we might want, in immortality. 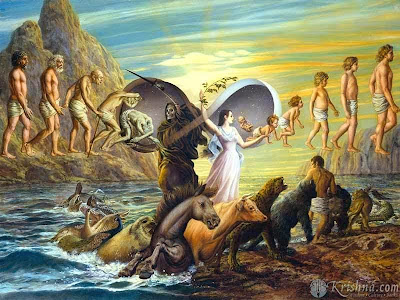 It might seem better, then, or more interesting, or more worthwhile, to have an open system. Unless the system is ever-expanding, though, or includes an ever-expanding population of unprecedented elements, eventually it will loop back around. Thus, given any finite error tolerance, eventually events will have to get more and more remote from the original run of events you lived through -- with no end to the increasing remoteness.

Suppose that conscious experience is what matters. (Parallel arguments can be made for other ways of thinking about what matters.) First, one might cycle through every possible human experience. Suppose, for example, that human experience depends on a brain of no more than a hundred trillion neurons (currently we have a hundred billion, but that might change), and that each neuron is capable of one of a hundred trillion relevantly distinguishable states, and that any difference in even one neuron in the course of a ten-second "specious present" results in a relevantly distinguishable experience. A liberal view of the relationship between different neural states and different possible experiences!

Of course such numbers, though large, are still finite. So once you're done living through all the experiences of seeming-Aristotle, seeming-Gandhi, seeming-Hitler, seeming-Hitler-seeming-to-remember-having-earlier-been-Gandhi, seeming-future-super-genius, and seeming-every-possible-person-else and many, many more experiences that probably wouldn't coherently belong to anyone's life, well, you've either got to settle in for some repetition or find some new range of experiences that include experiences that are no longer human. [Clarification June 1: Not all these states need occur, but that only shortens the path to looping or alien weirdness.] Go through the mammals. Then go through hypothetical aliens. Expand, expand -- eventually you'll have run through all possible smallish creatures with a neural or similar basis and you'll need to go to experiences that are either radically alien or vastly superhuman or both. At some point -- maybe not so far along in this process -- it seems reasonable to wonder, is the being who is doing all this really "you"? Even if there is some continuous causal thread reaching back to you as you are now, should you, as you are now, care about that being's future any more than you care about the future of some being unrelated to you?

Either amnesic infinite repetition or a limitless range of unfathomable alien weirdness. Those appear to be the choices.

References to good discussions of this in the existing literature welcome in the comments section!

[Thanks particularly to Benjamin Mitchell-Yellin for discussion.]