Space Agencies Need, but Don't Appear to Have, Policies Governing Contact with Microbial Life on Mars

NASA and other leading space agencies do not appear to have formal policies about how to treat microbial life if it's found elsewhere in the solar system. I find this surprising.

I still need to do a more thorough search to be confident of this. However, last week when I went to an event jointly sponsored by NASA and the Library of Congress, the people I spoke to there seemed to think that there's no worked-out formal policy; nor have I found such a policy in subsequent internet searches. (Please correct me by email or in the comments below if I'm wrong!)

NASA and other space agencies do have rigorous and detailed protocols regarding the cross-contamination of microbial life between planets. If you want to send a lander to Mars, it must be thoroughly sterilized. Likewise, extensive protocols are being developed to protect Earth from possible extra-terrestrial microbes in returned samples. NASA has an Office of Planetary Protection that focuses on these issues. However contact with microbial life raises ethical issues besides cross-contamination. 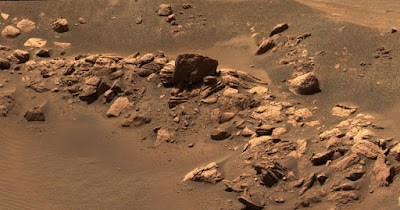 Suppose NASA discovers a patch of microbes on Mars.

Presumably, NASA scientists will want to test it -- to see how similar Martian life is to Earthly life, for example. Testing it might involve touching it. Maybe NASA scientists will want a rover to scoop up a sample for chemical analysis. But that would mean interfering with the organisms, exposing them to risk. Even just shining light on microbes to examine them more closely is a form of interference that presents some risk -- even the shadow of a parked rover creates a small degree of interference and risk. How much interference with extraterrestrial microbial life is acceptable? How much risk? These questions will rise acutely as soon as we discover extraterrestrial life. In fact, proving that we have actually discovered life might already involve some interference, especially if the sample is ambiguous or subsurface. These questions are quite independent of existing regulations about sterilization and contamination. We need to consider them now, in advance, before we discover life. Otherwise, NASA leaders might be in the position of making these decisions on the fly, without sufficient public input or oversight.

Here's another question in the ethics of contact: Suppose we discover a species of microbe that appears to be under threat of extinction due to local environmental conditions. Should we employ something like a "Prime Directive" policy, on the microbial level: no interference, even if that means extinction? Or should we take positive steps toward alien species protection?

Planetary protection policies that focus on contamination risk seem to rely on standard top-down regulatory models requiring compliance to a fixed set of detailed rules, but I wonder if a better model might be university Institutional Review Boards for the protection of human participants (IRBs) and Animal Care and Use Committees (ACUCs). Such committees have three appealing features:

First, rather than a rigid set of rules, IRBs and ACUCs employ a flexible set of general guidelines. The guidelines governing research on human participants tend to be very conservative about risk in general; but the committee is also charged with weighing risks against benefits. In the context of extraterrestrial microbiology, a reasonable standard might be extreme caution about interference, but one that allows, for example, a small sample to be very carefully taken from a large, healthy microbial colony, for experimentation and then careful disposal without re-release into the planetary environment. As reflection on this example suggests, people might have very different ethical opinions about how much risk and interference is appropriate, and of what sort. Also, expert scientists will want to think in advance about assessing the sources of risk and what feasible steps can be taken to minimize those risks, contingent on various types of possible preliminary information about the microbe's structure and habitat. I do not see evidence that these issues are being given the serious thought, with public input, that they need to be given.

Second, IRBs and ACUCs are normally constituted by a mix of scientist and non-scientist members, the latter typically drawn from the general public (often lawyers and schoolteachers). The scientists bring their scientific expertise which is essential to evaluating the risks and possible benefits, but the non-scientist members play an important role in expressing general community values and in keeping the scientists from possibly going too easy on their scientist friends, as well as sometimes specific expertise on related non-scientific issues. In the context of the treatment of extraterrestrial microbial life, a mixed committee also seems important. It shouldn't only be the folks at the space agencies who are making these calls.

Third, IRBs and ACUCs assess specific protocols in advance of the implementation of those protocols. This should be done where feasible, while also recognizing that some decisions may need to be made urgently without pre-approval when unexpected events occur.

I think we should begin to establish moderately specific national and international guidelines governing human interaction with microbial life elsewhere in the solar system, in which contamination is regarded as only one issue among several; that we should formulate these guidelines after broad input not only from scientists but also from the general public and from people with expertise in risk and research ethics; and that we should form committees, modeled on IRBs and ACUCs, of people who understand these guidelines and stand ready to evaluate proposals at the very moment we discover extraterrestrial life.