Philosophers normally treat personhood as all-or-nothing. An entity either is a person or is not a person. There are no half-persons, and no one has more personhood than anyone else. We usually don't think much about vague or in-between cases.

One exception is the literature on so-called "marginal cases" -- humans with severe disabilities, for example, or entities in the slow progression from fertilized egg to self-aware toddler, who either wholly or partially lack features that philosophers sometimes regard as essential to personhood.

The literature on personal identity offers other exceptions -- classically in Derek Parfit's wild thought experiments in Reasons and Persons and recently in Luke Roelofs' Combining Minds. "Split brain" callosotomy patients are another interesting case, as are craniopagus twins. 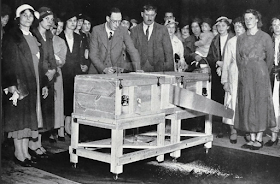 [P.T. Selbit, in an early attempt at person splitting]

The latter cases, though less common (and often purely hypothetical), present a deeper challenge to our notion of personhood than the former cases. The difference between one and two persons is more difficult to manage, conceptually and socially, than the difference between zero and one, which can be handled partly through extending our ordinary thinking about ordinary persons to a range of "marginal" cases, with some tweaks or reductions.

I won't press that point here. What I want to note instead is this: On almost all notions of personhood, we think of personhood as coming in discrete countable numbers -- zero, one, two, etc. -- not 1/8 or 2.4. At the same time, on most accounts of personhood, personhood is grounded in smoothly gradable phenomena, such as cognitive and emotional capacities, social role, and the history of or potentiality for these.

Thus we can in general constuct a gradual series from cases in which we have, clearly, a single person, down to zero or up to two, forcing a theoretical trilemma. In general form:

(1.) Case 1: an ordinary human being who no one would reasonably doubt counts as one person.

(2.) Case n: an entity that is either clearly not a person (the zero case) or a situation in which there clearly are two distinct people (the two case).

(3.) A series of arbitrarily slow and finely-graded steps between 1 and n.

The zero case is tricky if we want to use real-life examples, given that some philosophers would want to describe as persons both a fertilized egg and someone in an irreverisble comatose state due to extreme brain damage. Rather than entering those fights, we can use science fiction: Imagine removing cells from a person's body, one at a time, while keeping the body alive, until eventually only a single neuron remains.

For the two case, we might imagine slowly budding one brain off of another, or we might imagine two people whose brains are slowly interconnected eventually becoming an entity operating as a single person with a single stream of conscious experience.

Option 1: A discrete jump. You might argue that despite the slow series of changes, there will always be a sharp threshold at which personhood vanishes, arrives, merges, or splits. Despite continuity in the grounding properties of personhood, personhood itself remains discrete. Removing a single cell might cause a metaphysical saltation from personhood to nonpersonhood. Adding a single connection between two slowly merging brains might cause a metaphysical saltation from two people to one.

Option 3: Conceptual collapse. Some concepts have false presuppositions built into them and should be rejected entirely (e.g., exorcism, the luminiferous ether). Other concepts are okay for a limited range of cases but fail to apply, either yes-or-no, to other cases (e.g., primeness to things that aren't numbers). Maybe personhood is such a concept -- a concept built exclusively for ordinary countable-persons situations.

Option 1 strikes me as implausible. (Admittedly, some people are more willing than I to see sudden metaphysical saltations in gradual continua.)

On Option 3, we might eventually need to retire the concept of personhood. Maybe -- far-fetched science fiction, but not impossible -- the world will eventually be populated with intelligent AI or biological systems that can divide or merge at will (fission/fusion monsters). Our concept of personhood, if it's inherently and unchangeably committed to discrete countability, might end up looking like the quaint, unworkable relic of old days in which brains were inevitably confined to single bodies.

On Option 2, we face the task of modifying personhood into a gradable concept. I worry about the implications for our thinking about disability if we rush to do that too quickly for the zero case; but the one-to-two case is intriguing and insufficiently explored.

Eric Schwitzgebel at 8:23 AM